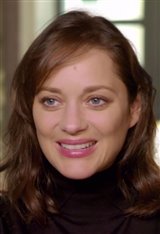 Born in Paris, Marion Cotillard grew up in Orléans, France. Her parents, Jean-Claude Cotillard and Niseema Theillaud, are both actors, and as a youngster, Marion began performing in her father's plays. She studied drama at the Conservatoire d'Orléans, and her professional screen debut was in an episode of the Canada/France produced TV series Highlander, starring Adrian Paul. In 1997 she won her first award—for her stage performance in Affaire classée. Roles in French TV and movies followed. In... See All