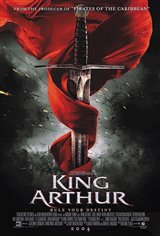 For centuries most historians believed that King Arthur was only a legend, but that legend was based on a real hero whose actions changed the face of Britain and the world forever. Like his loyal Knights, Arthur (Clive Owen) sees only chaos and devastation will follow Rome's final pullout of Britain. Although as a dedicated Christian he is desperate to return to Rome to influence the budding religion, his first loyalty is to his pagan Knights. Arthur sees his duty is to free them from their servitude to Rome so they may return to their ancestral homeland in Sarmatia.

However, before he can, he must lead his Knights of the Round Table on one last mission, deep into enemy territory on a quest of adventure and profound enlightenment. Here, Arthur, Lancelot (Ioan Gruffudd), Galahad (Hugh Dancy), Bors (Ray Winstone), Tristan, Dagonet and Gawain are forced to confront their traditional enemy: Merlin and his indigenous guerilla armies. Disdainfully called 'Woads' by the Knights for the Woad plant they use to dye their bodies, Arthur and his Knights will see these guerillas are the soul of Britain, devastated by generations of Roman rule. Now, with Rome gone, and without the help of Arthur and his knights, the invading Saxons will roll over the people like an avalanche.

Under the guidance of former enemy Merlin (Stephen Dillane) and the beautiful, courageous Guinevere (Keira Knightley), Arthur will struggle to find the strength to forsake his dreams of Rome to 'become a leader in this land,' and to change the face of history.