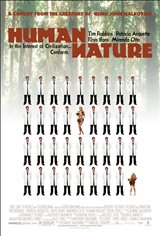 Lila (Arquette) has been afflicted since puberty with a hormonal disorder that causes copious hair growth all over her body. Now an adult, Lila has few expectations of happiness. But nature, human and otherwise, has its sexual side, and Lila can no longer deny hers. She goes out in search of a mate. Resigning herself to certain compromises, she begins seeing an electrologist named Louise (Perez), who becomes something of a confidante. One day, Louise announces that she has the perfect guy for Lila: Nathan (Robbins), a brilliant, romantically inexperienced behaviorist.

While hiking in the forest one day, Lila and Nathan come upon a feral man (Rhys Ifans), and capture him. Despite Lila's misgivings, the man is taken to Nathan's lab, where he is installed in a plastic cell and christened Puff.

Raised as an ape by his deranged, simian -obsessed father, Puff shows no trace of ever having been in civilization. Nathan sets out to change all that, schooling Puff not only in polite speech, but introducing him to all manner of Western Civ finery, from poetry, opera and "Moby Dick" to musical theatre, foie gras and smoking jackets.