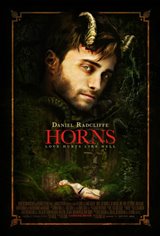 Ig Perrish (Daniel Radcliffe) is an outcast in his town, but he has his girlfriend, Merrin Williams (Juno Temple), and that's all that matters to him.

However, Ig wakes up one day and discovers Merrin has been violently murdered. What's worse is that Ig is being accused of her murder.

He becomes an object of persecution by the townspeople, who believe him to be guilty. To his horror, as the situation worsens, he begins to grow horns. Ig decides it's up to him to find out who really killed his girlfriend.

Based on the novel by Joe Hill.