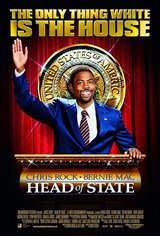 Mays Gilliam (Chris Rock) is a Washington D.C. neighborhood alderman who’s about to be red-lined out of his job. But after the untimely death of the party frontrunner, Gilliam is plucked from obscurity and thrust into the limelight as his party’s nominee -- for President of the United States. The people around him react to the process, including his ex-girlfriend (Robin Givens) who changes her mind about dumping him, now that she has a chance at becoming the First Lady.