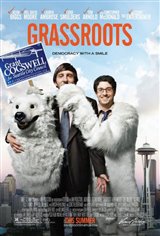 An eccentric, short-tempered, unemployed music critic who dresses in polar bear costumes decides to run for office in Seattle. He convinces his also unemployed journalist friend, Phil, to sign on as his political advisor and they recruit a group of rag tag volunteers. Together, they all wage a hilarious grassroots campaign that brings them within arms reach of victory.

Based on the novel Zioncheck for President written by Phil Campbell.