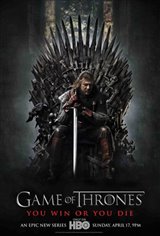 The first season of this fantasy drama chronicles the Stark family patriarch Ned’s (Sean bean) rise to power as the Hand of King Baratheon (Mark Addy). This request comes after the sudden and inexplicable death of the previous Hand, Jon Arryn. As Ned leaves the safety of Winterfell to uncover the mystery behind Arryn’s murder, his youngest son Bran (Isaac Hempstead-Wright) discovers a well-kept secret that the Lannisters, the noble family of the King’s wife and Queen Cersei (Lena Headey), have been keeping under wraps.

Ned Stark takes his daughters Sansa (Sophie Turner) and Arya (Maisie Williams) along with him on his journey to King’s Landing, the capital of the Seven Kingdoms. Tensions rise in King’s Landing as Ned gets closer to the truth, and in a sudden turn of events, he is captured by the illegitimate heir to the throne: Joffrey.

Across the narrow sea, exiled Prince Viserys Targaryen (Harry Lloyd) secures a new alliance with the savage Dothraki tribe in the hope that this will help him regain the Iron Throne, which his father had previously lost. He marries off his sister Daenerys (Emilia Clarke) to the Dothraki warlord Khal Drogo (Jason Momoa) in exchange for an army, but this arranged marriage proves challenging and tricky. Daenerys must learn to please her husband and the marriage renders surprising results towards the season’s end.

As the dreaded winter season slowly approaches, Ned Stark’s bastard son Jon Snow (Kit Harington) travels to the far north, where he joins the brotherhood of the Night’s Watch in order to protect the Wall that separates the kingdoms from the wrath of the feared White Walkers. Jon is joined by the Queen’s dwarf brother Tyrion (Peter Dinklage), who establishes unexpected relationships with those around him despite his Lannister allegiance.

The medieval fantasy series is based on author George R. R. Martin's bestselling series A Song of Ice and Fire.