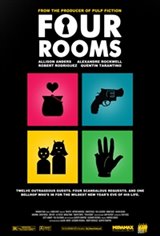 Four of the most celebrated directors in the independent film community pooled their talents for this episodic comedy. Ted (Tim Roth) is the new bellboy at a beautiful but decaying luxury hotel; he is not having a good time of it on New Year's Eve, his first night on the job.

In one room, a coven of witches are trying to summon the spirit of the goddess Diana; each of the witches must bring a different bodily fluid for their spell to work, but Eva (Ione Skye), who was supposed to bring semen, managed to lose her supplies, and needs Ted's help for a last-minute replacement.

Another room, where Ted was supposed to deliver some ice, turns out to house an angry husband (David Proval), who is holding his bound-and-gagged wife (Jennifer Beals) at gunpoint. A third room is taken by a tough-talking gangster (Antonio Banderas), his doormat wife (Tamlyn Tomita), and their two children; the gangster demands that Ted watch over the kids, who turn out to be mischievous terrors beyond Ted's wildest imagination.

And room number four is where an arrogant film actor (Quentin Tarantino) is holding a party. One of his guests makes a bet that he can get a Zippo lighter to light ten times in a row, with his finger at stake if he loses. Allison Anders directed the first segment, which also featured Madonna, Valeria Golino, and Lili Taylor.

The second segment was directed by Alexandre Rockwell, husband of his frequent leading lady Jennifer Beals. Robert Rodriguez directed the third story, while the finale was directed by its star, Quentin Tarantino; the final segment also features Bruce Willis, who appeared unbilled.