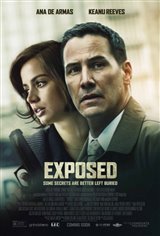 When his partner Joey Cullen is murdered, detective Scott Galban (Keanu Reeves) discovers that Joey had a lot of enemies and was deeply involved in police corruption, including taking money from drug dealers, which likely made him a target.

Joey's wife demands that Scott keep her husband's name from being tarnished, even though she knows the extent of his corruption. People who may have known anything about Joey's death keep getting killed, which makes Scott reluctant to call in the main witness, a young woman named Isabel de La Cruz (Ana De Armas).