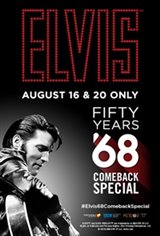 Fathom Events and ABG are thrilled to bring the Elvis '68 Comeback Special to the big screen in celebration of the special's 50th Anniversary for a special two-day event on August 16 & 20 only!

This anniversary event includes the legendary television special, plus an exclusive look at the making of the special, featuring a walkthrough of the NBC soundstage with insights from producer Steve Binder and others influenced by Presley, his music and this iconic event.