Dr. Seuss' The Cat in the Hat 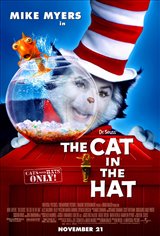 It seems that Sally (Fanning) and Conrad (Breslin) have pushed their single mom (Preston) to the limit. Conrad's endless rule breaking has his mom seriously considering military school for her son. Sally, tightly wound though well behaved, has bossed away every friend she has and divides her time between upbraiding her brother and inputting new To Do lists into her junior palm pilot.

But on the Saturday that their mom is to host her company party, her preparations have fallen prey to Conrad's shenanigans and she has laid down a mom-size decree: Sally and Conrad are not to leave the house while she is at work and are forbidden from making a mess or misbehaving in any way. The kids are left with little to do but sit and stare out of the window at the rain while their babysitter sleeps. But then they get an unexpected guest -- a six-foot-tall talking feline (Myers) sporting a red-and-white striped stovepipe hat, a jaunty red bow tie and a super-sized fondness for fun.