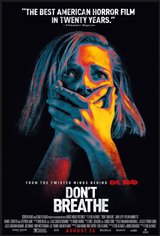 A group of young people break into the homes of the wealthy to find things to steal. Some things they keep, some things they sell. One of the thieves, Alex (Dylan Minnette), has a father who owns a security company, so they target his customers because Alex knows how to bypass their security systems. He's joined by Rocky (Jane Levy) and Money (Daniel Zovatto).

Money finds out about a blind military veteran (Stephen Lang) who won a major settlement after his child's accidental death. He thinks the veteran, who lives alone, has stashed the cash in his house.

They sedate the veteran's Rottweiler before entering the house. However, things don't go as planned. Although blind, the veteran is not nearly as helpless as they thought he would be.