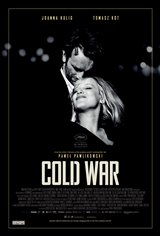 In 1949 rural Poland, Wiktor (Tomasz Kot) and his producing partner Irena (Agata Kulesza) are recording folk songs and auditioning musicians and dangers to showcase the authentic sounds of Poland. Zula (Joanna Kulig), a young woman posing as a village girl, shows up for the auditions and performs a song learned from a Russian movie, rather than a Polish tune. Irene senses that Zula isn't what she says she is, but Wiktor is smitten by the girl, even after his colleagues discover that she's on parole for killing her father with a knife. He casts Zula as one of the stars of the show.

When the show takes them to Berlin, Wiktor spots a chance to defect and asks Zula to join him, but she's not as eager as he is to escape their situation.

Originally titled Zimna wojna, Cold War debuted at the Cannes Film Festival, where it won an award for Best Director (Pawel Pawlikowski), just the first of many awards it won around the world.