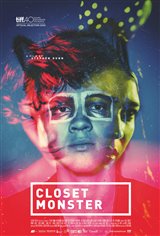 When Oscar Madly is just six years of age, his mother, Brin (Joanne Kelly) leaves him behind with his father (Aaron Abrams), at their home in a small Newfoundland town, after giving him a hamster. Shortly after, he witnesses a brutal hate crime and both of these events come back to haunt him over and over as he grows.

Years later, Oscar is now a teen (played by Connor Jessup) and he wants to go to New York to study to be a special effects makeup artist. He gets support from his best friend Gemma (Sofia Banzhaf) and his pet hamster, Buffy (voiced by Isabella Rossellini), but he worries that he may be homosexual and fears that if he comes out as gay, he will be victimized not only by his peers, but by his father.