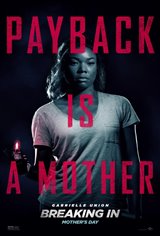 Watch Trailer
When her father is mysteriously murdered, Shaun Russell (Gabrielle Union) drives her two children to spend the weekend at the house she grew up in, to prepare it to be sold. The house is large and fancy, with an impenetrable state-of-the-art security system. Or so she thought.

A man breaks in and takes her son and daughter hostage, but when another man attacks Shaun outside the house, she fights him off and takes him down. Returning to the house, she sees her two children are being held by the first man (Billy Burke) as a screen comes down and covers the window.

He reveals to Shaun that he's only one of several men who are in the house. He tells her they only want the money from the safe and if she and her kids want to survive, they'd better cooperate. Not willing to give up easily, she disables the lights and disappears from sight. Shaun quickly makes plans on how she's going to get her children out of this situation alive.