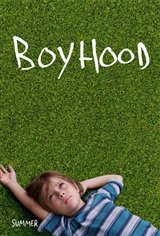 In 2002, Richard Linklater cast a six-year-old boy to play a child named Mason (Ellar Coltrane). Using the same cast from start to beginning, Linklater wrote and directed this groundbreaking story of a little boy growing from six to 18 before our eyes.

We watch as he goes through the ordinary passages of boyhood, from learning how to play football and riding a bicycle, to more complicated things such as discovering girls, trying alcohol and discovering what he wants to do with his life.