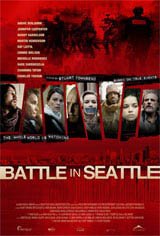 Based on one of the most incendiary political uprisings in a generation, Battle in Seattle takes an in-depth look at the five days that rocked the world in 1999 as tens of thousands of demonstrators took to the streets in protest of the World Trade Organization. What began as a peaceful protest intended to stop the WTO talks quickly escalated into a full-scale riot and eventual State of Emergency that squared off peaceful and unarmed protesters against the Seattle Police Department and the National Guard.

Told through true events, Battle in Seattle intertwines compelling points of view from a cross-section of society -- from protesters and police to delegates and doctors -- with no perspective left untold from those who intentionally or accidentally find themselves on the streets of Seattle on those last days of the millennium. Dramatic theatrical performances merge with actual footage of the event to bring these contrasting viewpoints to the screen.