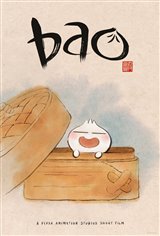 An aging Chinese-Canadian mother is amazed when one of her dumplings comes to life. With her only son grown up, with interests of his own, she sees this as a second shot at motherhood.

Delighted with her little Dumpling, she takes him everywhere and he loves her as much as she loves him. However, as Dumpling grows to adolescence, he wants less and less to do with Mom and becomes rebellious.

Mom has to come to terms with the bittersweet fact that her Dumpling is growing up and becoming independent, just as her son did.