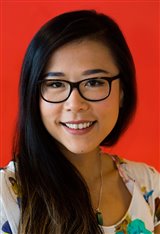 Domee ShiDomee Shi was born in Chongqing, China, but was raised in Toronto, Ontario. Influenced by animation from a young age, she went on to graduate from the animation program at Sheridan College in Oakville, Ontario. In June 2011, Domee was hired as a story intern at Pixar Animation Studios in California. She was soon promoted to story artist on the feature film Inside Out, then worked on The Good Dinosaur, Incredibles 2 and Toy Story 4. Her short film, Bao (2018), based on her experiences... See All