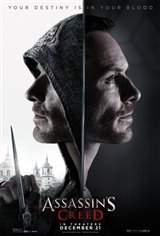 Based on the popular video game series of the same name, the film adaptation revolves around criminal Callum Lynch (Michael Fassbender), who is rescued from his own execution by Abstergo Industries, the modern-day incarnation of the Templar Order organization.

He is then forced to participate in the Animus Project and relive the memories of his ancestor Aguilar de Nerha, in 15th century Spain. Through these memories, Callum discovers he's a descendant of the secret Assassins society, and gains incredible knowledge and skills that will help him confront the oppressive and powerful enemies of the Assassins — the Knights Templar organization of the present day.