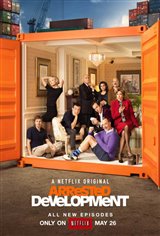 Michael Bluth forms his own Michael B. Company but when the real estate market collapses, he's forced to abandon the Sudden Valley project and moves in with his son.

Lindsay goes on a trip to India, where she hopes to gain spiritual enlightenment. Michael meets with director Ron Howard to start work on a film about his life "Untitled Michael B. Project." Tobias, depressed when he finds out the Bluths think he's gay, decides to take acting classes.

George-Michael heads off to college to begin his journey of self discovery and develops an app called Fakeblock. Buster is having a hard time trying to get someone to take care of him and rejoins the army for a second time before suffering another accident.