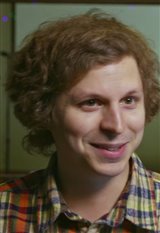 Brampton, Ontario native Michael Cera began working at the age of four in a Tim Horton's commercial. His first TV role was playing the little brother of the main character in the Canadian TV movie What Katy Did (1999). Guest appearances on series such as I Was a Sixth Grade Alien, Twice in a Lifetime, La Femme Nikita and Doc followed, as well as a supporting role in the TV movie Switching Goals (1999), starring Mary-Kate and Ashley Olsen. Cera's motion picture debut was in the big budget flick... See All