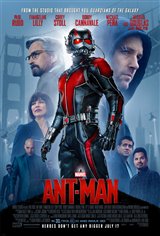 Career burglar Scott Lang (Paul Rudd) is trying to turn his life around after getting released from jail. When he is unsuccessful at finding a job he reluctantly agrees to do a heist, but all he finds is a special suit. The suit's creator, Hank Pym (Michael Douglas), tracks him down because he needs Scott's help.

Years earlier, Pym realized the technology he created for the suit was too powerful and dangerous, and took it underground, denying its existence. When his protégé Damien Cross makes his own version of the suit with the intention of selling it to the highest bidder for world domination, Hank has to rely on Scott to become the Ant-Man and stop Cross once and for all.