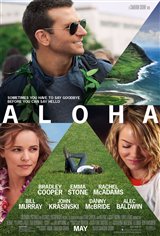 After blowing a mission, a military contractor Brian Gilcrest (Bradley Cooper) returns to the US Space Program in Honolulu, Hawaii, where he left behind a former girlfriend, Tracy (Rachel McAdams).

He's introduced to his Air Force liaison Ng (Emma Stone), who has boundless energy. Reluctant at first to be part of a team with Ng, claiming himself to be a lone wolf, Brian finds himself enjoying his time spent with her, while at the same time he's drawn back towards Tracy, who says she's moved on, but really hasn't.