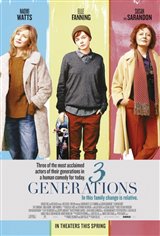 A teenager (Elle Fanning) who wants to transition from female to male needs both his single mother (Naomi Watts) and his estranged biological father's (Tate Donovan) signatures on legal documents to allow him to begin hormone treatments.

His mother, Maggie, and lesbian grandmother Dolly (Susan Sarandon) struggle to understand and come to terms with Ray's wishes, while his father has already moved on with a new family and is reluctant to get involved with the child he has successfully ignored for years.