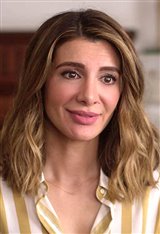 Nasim Pedrad was born in Iran to a Muslim family, which emigrated to California in 1984 when Nasim was a toddler. Her parents wanted to make sure Nasim and her sister grew up bilingual, so they often spoke Farsi inside their home. Nasim credits her comedic chops to watching I Love Lucy and Saturday Night Live when she was younger to help better understand American culture. She graduated from UCLA School of Theater, Film and Television in 2003, having been a member of the UCLA Spring Sing Company... See All