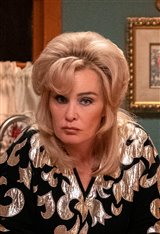 Born in Cloquet, Minnesota, Lange seemed doomed to be an acting footnote when her first film role was opposite a giant ape in the 1976 remake of King Kong. It seemed like no one would take the actress seriously in a remake of a cheesy movie, but the role won Lange her first of four Golden Globes (she would go on to be nominated a total of nine times) for Best Acting Debut in a Motion Picture - Female. Hollywood sat up and took notice of the emerging star. Going on to win the Best Supporting Actress OscarÂ® for her work in Tootsie six years later and then the Best Actress OscarÂ® for Blue Sky in 1995 -- she said, "I feel like I just figured out how to do this acting thing."

Along the way, the daughter of a traveling salesman who moved 18 times as a youth, had a succession of famous lovers. Married briefly to Spanish photographer Paco Grande, she then had a relationship (and a child) with dancer and actor Mikhail Baryshnikov before getting into a long-term relationship with writer and actor Sam Shepard (with whom she has another two children).

Lange started her career as a model in New York before getting into acting. Not many ex-models have the kind of acting success Jessica has enjoyed, however. With awards from film festivals all over the world, Lange, now in her 50s, continues to work steadily. She starred on the popular television series American Horror Story as well as the film The Vow (2012) and is currently playing a lead role as Rose on the Netflix series The Politician (2019).