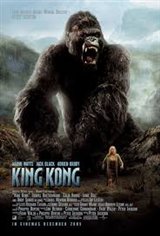 Ann Darrow (Naomi Watts), an actress from the world of vaudeville, finds herself out of a job in Depression-era New York. Her luck changes when she meets Carl Denham (Jack Black). Denham is an entrepreneur, raconteur, adventurer and filmmaker who is struggling to make a name for himself in the entertainment industry. Bold, ebullient and charismatic, Denham has a natural sense of showmanship and an appetite for greatness, which ultimately leads to catastrophe.

Meanwhile, Jack Driscoll (Adrien Brody), a New York playwright, finds his heart and physical courage are put to the test when a gigantic ape is captured in the wild and brought to civilization.