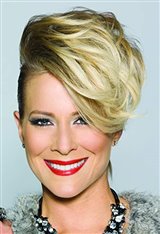 Brittany Daniel was born in Gainesville, Florida, five minutes before her sister Cynthia. Growing up with her brother and twin sister under strict Catholic parentage, Daniel knew she wanted to be an actress and began to model from an early age. Continuing to model into high school, she and her sister could be seen in magazines such as Teen, Seventeen and YM.

She then moved onto the small screen, appearing in series such as The New Leave It to Beaver and Swan's Crossing (which garnered her a Young Artists Award nomination).

In 1995 Brittany and Cynthia landed their first feature film gig, appearing alongside Leonardo DiCaprio in The Basketball Diaries. But it was with their roles on the television series Sweet Valley High, based on the popular novels, that they found themselves household names, with their faces appearing in teen magazines on a monthly basis. They won a Young Artist Award in 1995 for their work on the show. During their time on Sweet Valley, they also filmed a number of commercials for products such as McDonald's and Doublemint Gum.

Since then, Cynthia branched out into photography and left acting behind, but Brittany continued to work in television with a regular role on Dawson's Creek in 1998, and returned to feature work with a co-starring role in films like Joe Dirt (2001) opposite David Spade and Broken Lizard's Club Dread (2004).

Since then, she's worked in a number of independent films such as Skyline (2010), as well as on television series such as It's Always Sunny in Philadelphia from 2005 to 2010.