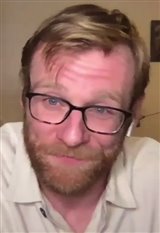 Brian Gleeson is an Irish actor from Dublin. He fell in love with acting early in his life while performing school plays. He then joined the Gaity's Youth Theatre Company in Dublin to expand his acting skills and pursue a career in acting.

Brian made his big screen debut in 2006 in the Irish film The Tiger's Tail as Connor O'Leary, alongside his father, Brendan Gleeson.

His more recognizable role came in 2010, when he played Hughie Power on the Irish television series, Love/Hate. His performance on the series earned him an Irish Film and Television Awards nomination for Best Actor in a Supporting Role in Television.

Brian made his Hollywood feature film debut as Gus in the movie Snow White and the Huntsman (2012).

In 2019, Brian also appeared in the fifth season of the hit television series, Peaky Blinders, as Jimmy McCavern.

His older brother Domhnall Gleeson is also an actor, appearing in blockbuster films such as Star Wars: The Force Awakens, Star Wars: The Last Jedi, and both parts of Harry Potter and the Deathly Hallows.

One of Brian's favorite moments of his career happened in 2015, when he had the opportunity to appear on stage alongside his brother Domhnall and father Brendan in the play The Walworth Farce.

Most recently, he appeared alongside fellow Irish actor Gabriel Byrne in the feature film Death of a Ladies' Man (2021).

In early 2020, he was in production for the Amazon Prime Video TV series titled Frank of Ireland, in which he plays the title role alongside his brother Domhnall. The first five episodes were filmed before lockdown, and they had to complete the sixth episode when lockdown rules were eased, taking precautions on set. Their father Brendan Gleeson also makes an appearance on the show. The series debuted on Amazon Prime on April 16, 2021.

One of Brian's favorite moments of his career happe