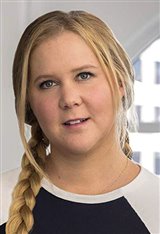 Amy Beth Schumer was born in Manhattan, New York and grew up in Long Island, where she attended South Side High School. Amy was voted both "Class Clown" and "Teacher's Worst Nightmare" upon graduation in 1999.

In 2003 she graduated from Towson University with a degree in theatre. After graduating she moved to New York City and studied at the William Esper Studio while working as a bartender and a waitress.

She first began performing stand-up comedy in June 2004 at the Gotham Comedy Club in New York.

In 2007 she placed fourth on season five of NBC's Last Comic Standing and she placed second on Comedy Central's Reality Bites Back in 2008.

After a few years of doing stand up in New York clubs and playing small roles in TV comedy series such 30 Rock and Curb Your Enthusiasm, Amy landed the role of Trish in Jon Glaser's TV Comedy series Delocated.

Amy got her big break almost overnight when Comedy Central gave her an hour-long stand-up specialMostly Sex Stuff in 2012, followed by her own series, Inside Amy Schumer, which premiered in spring of 2013.

Trainwreck (2015) is Amy's first starring role in a film. The raunchy feature was written by Amy and directed and produced by Judd Apatow. She earned a Golden Globe nomination for her comedic performance.

Since Trainwreck, she has lent her voice to The Simpsons (2016) and Family Guy (2016), and acted in the comedy Snatched (2017) with Goldie Hawn and the drama Thank You for Your Service (2017) with Miles Teller.

Her stand up comedy special, Amy Schumer: Growing (2019), is currently streaming on Netflix.

The comedian, actress and writer grew up as a fan of Gilda Radner, Carol Burnett, Lucille Ball and Whoopi Goldberg. Her father is a cousin of U.S. Senator Chuck Schumer and her godmother is Judith Light, who starred on the TV series Who's the Boss.

In February 2018 Amy married Chris Fischer and their son, Gene Attell Fischer, was born May 5, 2019.