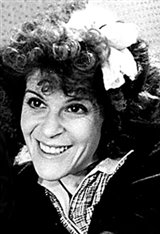 American actress and comedian Gilda Radner was born in Detroit, Michigan to an affluent Jewish family, the younger of two children. She often described her childhood as having been difficult. Her mother, unable to tolerate Detroit winters, would uproot their entire family to spend four months each year in Florida. These yearly disruptions prevented Gilda from making close friends. Instead, she grew close with her nanny, "Dibby," on whom she based her famous Saturday Night Live character Emily Litella.

As a child, Gilda was overweight and would often be teased by her classmates, resulting in a series of eating disorders. Her mother was distant but Gilda and her father had a very close bond. He died of brain cancer when she was 14. Before his death, he encouraged his daughter to pursue performing and often took her to Broadway touring shows in downtown Detroit.

After high school Gilda attended the University of Michigan, where she majored in drama but never graduated. She and her boyfriend moved to Toronto together, at which point she joined Second City Comedy, an improvisational comedy troupe where she performed alongside the likes of Dan Akroyd, John Belushi, and Bill Murray.

In 1973, Gilda and many of her Second City friends made the move to New York City, where they performed in The National Lampoon Show, an Off-Broadway cabaret, and on The National Lampoon Radio Hour. Producer Lorne Michaels chose several performers from these productions, including Gilda, to star in his new late night comedy and variety show, Saturday Night Live. Gilda would star on the show from 1978 until 1980 and would even nab an Emmy in 1978 for her performances.

After leaving the show, Gilda attempted a film career and appeared in the comedy First Family alongside Bob Newhart. As a result of being in the spotlight and under constant scrutiny, her severe body issues from her childhood resurfaced and she suffered from bouts of bulimia.

She met her first husband, G.E. Smith, while performing on Broadway, and the two married in 1980. Two years later, while shooting the movie Hanky Panky, Gilda fell in love with her co-star Gene Wilder. She and Smith divorced that year and she married Wilder in 1984. They co-starred together again in Haunted Honeymoon (1986) before Gilda was diagnosed with late-stage ovarian cancer.

She battled the disease for several years and wrote about her struggle and life experiences in her memoir, It’s Always Something, which was published in 1989. She died later that same year on May 20, at the age of 42. A documentary entitled Love, Gilda was released in 2018 and depicts Gilda’s life story, as told through a collection of the performer’s diaries and personal tapes.