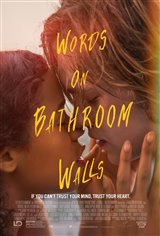 Adam (Charlie Plummer), in his senior year of high school, has aspirations to become a chef. In the middle of the year, when Adam has an episode in his science class, he is later diagnosed with paranoid schizophrenia. Like most people with the diagnosis, Adam has visual and auditory hallucinations, except he actually sees his voices.

While his mother is on a quest for a cure, Adam transfers to a new school, where he meets Maya (Taylor Russell), who immediately is attracted to him. She doesn’t know Adam’s diagnosis and he tries to keep it from her. As the two slowly fall in love, Adam pushes Maya away, but she forces him to confront his diagnosis and open his heart to love.