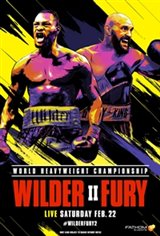 Fathom Events and Fox Sports bring the biggest Heavyweight title fight in decades to theatres as World Champion knock out artist, Deontay "The Bronze Bomber" Wilder defends his title against Tyson "The Gypsy King" Fury LIVE from the MGM in Las Vegas!

The two undefeated heavy hitters square off for the second time after an incredible first fight ended in a controversial split decision draw, now they're back to settle the score in the most anticipated rematch in in recent heavyweight history.