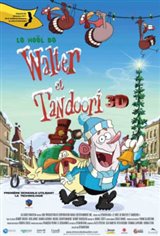 A small town. A big business magnate. A talking chicken. A gaggle of turkeys on the run from being eaten for Christmas dinner. And an unlikely hero in the middle of them all!

Inventor WALTER takes on big business magnate, Bill Counter to save the picturesque town of Hart's Landing. Just in time for the Christmas rush, Counter opens a gigantic manufacturing store making empty promises about being environmentally responsible but encouraging the townspeople to buy, buy, buy! Walter's best friend Tandoori, an Indian talking chicken, falls prey to Counter's promises, unaware that Counter is planning on having him for Christmas dinner! WALTER, always environmentally alert, notices air and water pollution, and a new attitude of the townspeople of toss and rebuy rather than reuse and recycle. Shy but determined WALTER has to rescue a little girl, divert a flood, enlist the help of a group of turkeys on the run, and save his friend - all while pursuing the love of his life, Melanie.