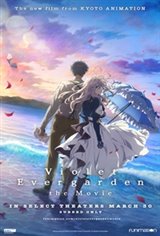 Violet Evergarden, who lost her arms while fighting as a child soldier during the war, uses her mechanical arms as a professional ghostwriter, composing poignant, touching letters for people to send to their loved ones. It's been several years since the end of the war and people are still healing from the deeps wounds caused by the violence and deprivation. The world gradually regains peace. Life is changed by the development of new technology and people are moving forward.

Violet is hired by a young man who doesn't have long to live, and who wants to leave his family letters to be read after his death. But she still has feelings for Gilbert, who hasn't been heard from since the war ended. When Violet receives a clue that Gilbert may be alive, she decides to search for him.