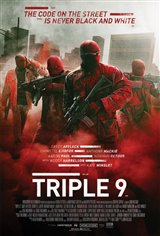 Ex-Special Forces member Michael Atwood (Chiwetel Ejiofor) leads a crew of corrupt cops in a daring bank heist. Detective Sergeant Jeffrey Allen (Woody Harrelson) is roped in to investigate the bank robberies. He is unaware that his nephew Chris Allen (Casey Affleck) has been partnered with one of the corrupt cops (Anthony Mackie).

When Russian-Israeli mob boss Irina Vlaslov (Kate Winslet) forces them into another seemingly impossible heist, the crew decides to stage a "999" incident which is cop code for "officer down." They plan to take down one of their own to carry out the heist but things soon take an ugly turn.