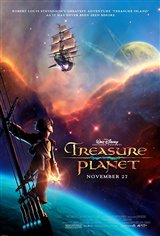 A fifteen-year-old boy named Jim Hawkins joins the crew of an intergalactic expedition as cabin boy aboard a glittering space galleon. Befriended by the ship's charismatic cyborg (part man, part machine) cook John Silver, Jim blossoms under his guidance, and shows the makings of a fine spacer as he and the alien crew battle supernovas, black holes and ferocious space storms. But even greater dangers lie ahead when Jim discovers that his trusted friend Silver is actually a scheming pirate with mutiny in mind. Confronted by a betrayal that cuts deep to his soul, Jim is transformed from boy to man as he finds the strength to face down the mutineers and discovers a "treasure" greater than he had ever imagined.