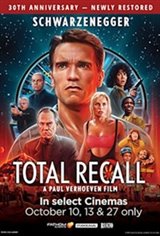 Starring Arnold Schwarzenegger, Sharon Stone, Ronny Cox and Michael Ironside, the film tells the story of a construction worker who suddenly finds himself embroiled in espionage on Mars and unable to determine if the experiences are real or the result of memory implants.

Adapted from Philip K. Dick's short novel, We Can Remember It For You Wholesale, TOTAL RECALL is a truly visionary film ahead of its time. Featuring a career best performance from the legendary Arnold Schwarzenegger, the film was restored from a scan of the original 35mm negative and was made at Technicolor LA in tiff 16 bits format.