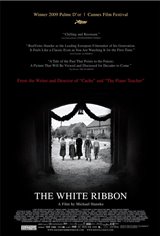 The film's title refers to the loss of innocence. Crisply shot in black and white, the film is set in a rural German village just prior to World War I. Voiced by an old man (Ernst Jacobi) who used to be the village schoolteacher, the story reveals mysterious goings-on.

A doctor falls off his horse, apparently tripped by a rigged wire. The son of the local baron is found beaten. A barn is burned down. So who is to blame?

As the war approaches, suspicion begins to escalate, perhaps presaging Germany's next 30 years. In German with English subtitles.