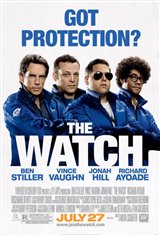 Evan Trautwig (Ben Stiller) is an active member of the small town of Glenview and the senior manager at the local Costco. One night when a Costco security guard is murdered, Evan decides to form a Neighborhood Watch and makes it his duty to protect his community. Unfortunately, Evan is only able to recruit three members: construction worker Bob (Vince Vaughn), high school dropout Franklin (Jonah Hill), and recently divorced Jamarcus (Richard Ayoade).

Together, this group of overworked, exhausted suburban fathers uses the neighborhood watch as a way to escape their families and get in some male bonding time. However, while on duty one night, the Watch discovers a highly dangerous metallic orb and deduces that they are in for a real alien invasion. The men are then forced to protect their neighborhood, and themselves, against these dangerous extraterrestrial creatures.