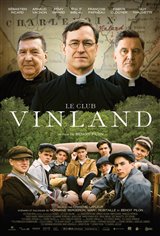 Christmas 1948. Brother Jean, a teacher in a boarding school for boys in Charlevoix, presents with his students a play defending the hypothesis that says Canada was not discovered by Jacques Cartier in 1534, but by Vikings in 1000 AD. Coming from Quebec City to attend the show, Brother Roséa warns his colleague against the dangers of propagating ideas contrary to the official version defended by the Catholic Church.

A progressive at heart, Brother Jean continues to stimulate his students' curiosity for this theory through the Vinland club, named after the mythical land bordered by vineyards described in the saga of Icelandic explorer Leif Erikson. Convinced that Vinland would be located on the Charlevoix coast, the teacher searched the premises with his students, to find Viking remains. His contagious enthusiasm manages to overcome the resistance of Émile, a difficult new pupil, grieving for his father who died in the war.