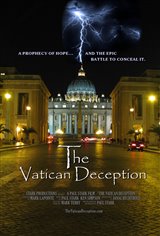 This documentary explores the prophecies of the Blessed Virgin Mary in Fatima, Portugal, when three children reported that a series of apparitions took place at the height of World War I. According to the children, the Virgin announced the end of the Great War. What followed was a turn of events that led to the historic armistice of November 11, 1918.

The prophecy of greatest interest involves an instruction for the Pope to consecrate Russia – a five-minute prayer that would stave off a global apocalypse. While the threat of Russian invasion in the Ukraine is renewing fears of World War III, the Vatican remains strangely evasive about the Russian consecration.

In 1960, Pope John XXIII made the decision not to publish the Third Secret, reportedly because it was in conflict with his plans to make major reforms to the Church. In 2000, the Vatican released what is called the final secret of Fatima, but since then has refused to answer questions about evidence pointing to another document that was never revealed and has been guarded by the Vatican since 1957.

The secrets of Fatima give an ultimatum – that peace will come if certain conditions are met and if not, there will be global disasters. The film predicts that unless the Catholic Church responds in a way that will bring about the positive outcome promised by prophecy, things will worsen for the already scandal-plagued Church and for humanity itself.