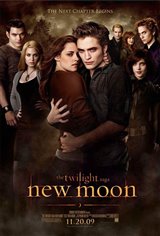 When Bella's (Kristen Stewart) life is put in danger on her 18th birthday due to his brother's lack of self control, Edward (Robert Pattinson) becomes more and more distant. Bella goes into shock when he tells her he's leaving Forks. Catatonic and numb with grief, Bella goes through the motions of living to placate her father, but inside, she feels only pain. Her high school friends avoid her because of her strange and anti-social behavior. Only Jacob Black (Taylor Lautner), a member of the Quileute tribe, remains her friend.

Bella finds that when she puts herself in danger, she can see and hear Edward. So she gets two old motorcycles and asks Jacob to fix them up. Eventually, thanks to Jacob's light-hearted friendship, Bella finds herself capable of smiling again.

When Jacob, who has a supernatural secret of his own, suddenly refuses to see her anymore, her heart is once again broken. Bella decides she must put herself in the most danger she's ever experienced in a desperate bid to see and hear Edward.