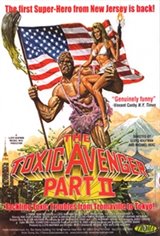 Ron Fazio returns as The Toxic Avenger, the first hideously deformed monster hero of superhuman size and strength ever to come from New Jersey, in Troma's mercenary sequel to its hit film The Toxic Avenger. Since Toxie cleaned up Tromaville, New Jersey in the first film, he now has no one to fight.

He works at the Tromaville Center for The Blind and has a girlfriend named Claire (Phoebe Legere). But the peace in Tromaville is shattered when an evil chemical company, Apocalypse Inc., and its dastardly chairman (Rick Collins), set their sights on Tromaville. In order to take over Tromaville, the Toxic Avenger must be eliminated.

By intense study, Apocalypse's second-in-command, Maifaire (Lisa Gaye), discovers that Toxie's desire to vanquish villains is caused by particles manufactured in his body called tromatons. Apocalypse Inc. bribes Toxie's psychiatrist to suggest that Toxie form a relationship with his father in order to get Toxie out of the country.

His father happens to be in Japan and Toxie makes the trip to find him. While out of sight of his hometown, Apocalypse Inc. takes over Tromaville. Meanwhile, in Japan, Toxie finally finds his father but it turns out that his father is an arch-villain who must be killed.

Anti-tromatons employed in the battle with his father render him weak and wounded, but a team of sumo wrestlers nurse him back to health and Toxie travels back to New Jersey for a confrontation with Apocalypse Inc. in Tromaville.