The Three Burials of Melquiades Estrada 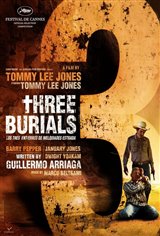 Mequiades is reburied in a public cemetery, but Perkins forces Norton at gunpoint to exhume the body so Mequiades can be buried in Mexico, as per his wishes. With his captive in tow and the body tied to a mule, Pete undertakes a dangerous and quixotic journey into Mexico.