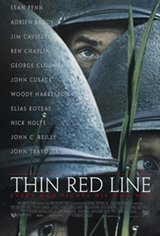 This is director Malick's first film since 1978's Days of Heaven which starred a young Richard Gere and won the Academy Award for Best Cinematography.

World War II seems to be in vogue these days as Spielberg went to war in Europe in Saving Private Ryan and Malick does battle on Guadalcanal Island with a battalion of Americans preparing to attack a Japanese stronghold.

Based on James Jones' 1962 novel recalling his 1942 Guadalcanal battle experiences.