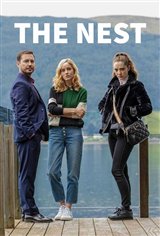 Emily (Sophie Rundle) and Dan (Martin Compston) desperately want to have a baby. After years of trying, they give an embryo to Dan's older sister to carry.

One night, when Emily is driving home, she's distracted for a moment. In that split second, she hits a teenage girl named Kaya (Mirren Mack). Kaya's knee is hurt, and she takes up Emily's offer to drive her to the hospital, but on the way, she asks to get out. Emily insists Kaya have a doctor look at her knee, and gives her some cash to take a cab.

Kaya goes to the hospital the next day to have her knee looked at. A little while later, she spots Emily and her husband walking into the hospital and follows them. They go into a room where Dan's sister is. Kaya discovers the sister is their surrogate and was carrying their baby, but has suffered a miscarriage.

Later, Kaya approaches Emily to offer to be her surrogate. Emily only has one embryo left, but after getting to know Kaya, she agrees. Dan is harder to convince. He sees that Kaya, who has no family and no money, is impressed by their beautiful home and their expensive cars. He has her investigated, but not before Emily has had the embroyo implanted in Kaya.