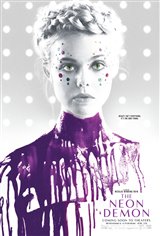 Jesse (Elle Fanning), an aspiring model, moves to Los Angeles, where she's accepted into an agency and begins a promising career. However, when the pressure from the beauty-obsessed women around her becomes too much, the demons from her past catch up with her.

Jesse meets Ruby (Jena Malone), a make-up artist who helps open doors for Jesse and introduces her to people in Los Angeles. The two become fast friends, but unbeknownst to Jesse, Ruby has ulterior motives. Ruby introduces Jesse to Sarah (Abbey Lee) and Gigi (Bella Heathcote), two aspiring models. As Jesse ascends quickly in the world of modeling, the other girls can't help but feel jealous.