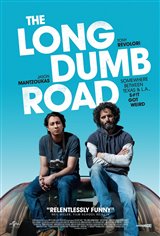 When teenager Nat (Tony Revolori) stops at a gas station to get his car fixed, he witnesses 30-something Richard (Jason Mantzoukas) getting fired. When Richard finds out Nat needs a mechanic, he volunteers himself. Once the car is fixed, Richard begs Nat for a ride and the teen reluctantly agrees.

Nat, a photographer, is heading to Los Angeles to begin art school. He's lived a sheltered life, so he decided to travel by car in order to find the real America en route to new beginnings out West. Richard, a lovably unkempt motormouth who calls himself a "pro at drinking and driving," is simply looking for connection in the moment — and maybe a beer or ten — while he grapples with indecision, past mistakes and dead ends. As they travel through the American Southwest, Nat is exposed to a whole new world through a variety of adventures initiated by Richard.